Sire of the litter "B" 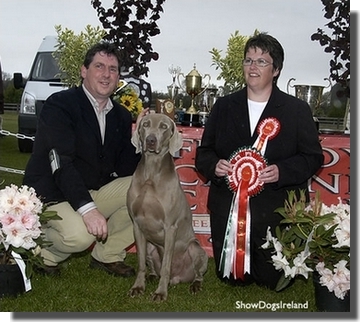 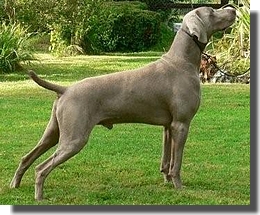 Ally was born in 2002 from the merger of two exceptional individuals. Father Czolkins ghosting was a combination of English working and show lines with the influx of new blood Ghostwind from Australia. Mother was a beautiful Nl / Lux / Ir Sh Ch Smokeycity Rivenwil Revelation, which was brought to England from the USA. It was again a combination of working and show lines. In the prestigious Kennel Smokey City, which is aimed at keeping both working and exhibition weimaraners, many of the high-quality individuals. Her father Am Ch Smokey City El Nino was the father of more than 55 champions! and his mother, Am Ch Norman's Smokey City Heat Wave JH became inter alia, 2x winners of Special show, and in 1996 received the prestigious "Top Producer Dam 1996"!
Ally, after their ancestors gave to a very beautiful and noble appearance. It is a light silver 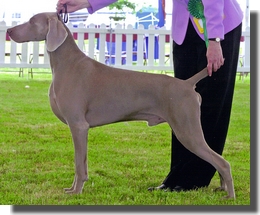 -colored dog, midle strong bone, excellent conformation with beautifully modeled head, forechest and deep chest. Because he has ideal physical proportions in the ring is excellent, spacious and dynamic movement. Its elegant look and graceful movement of his pre-destined to reach several times the BIS - Best In Show - Absolute Winner! Video of his on the move here. Twice he won the title BISS - The absolute winner of a Special Weimaraner Show in Ireland! Ally is the first weimaraner bred in Great Britain for several decades, which won the American Championship, Irish Championship, Great Britan Championship. Arrived in America in June 2004 and the ocean is presented in big style - in July of that year he managed to complete the American Championships, the start and finish up with him just 1 month! The American Championship finished victory Weimaraner Specialty Show, 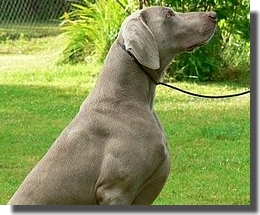 hosted by "Weimaraner Club of GC's". Before traveling to America has successfully introduced the Shows world in his homeland (Ireland) and Britain. He qualified for the prestigious competition "Puppy of the Year", which in 2003 won BIS PUPPY - BEST puppy of the show for all breeds! His first CC (similar to our CACIB) won in 2004 to show "Southern Counties Championship Show", the CC at this show and joined BOB, best dog in the breed of 170 entries Weimaraners and then added after an absolute victory in the Group 4 from the Junior Dog class ( All breeds - the 2000 subjects entered the exhibition!). Ally has received numerous prestigious prizes and awards, including the champion of Britain, Ireland, America, Interchampion ... . Overview Ally greatest show successes here.
Ally is not just a dog show, but his temperament and innate desire and passion to work predestined to be just as successful at shows and at work. Ally´s domain is a "searching on the field". It has searching a relentless, systematic, fast and far to find and solid pointing game. During his time in America with minimum training earned his AKC CD - a test of obedience title and JH (Junior Hunter) - hunting tests. American Weimaraner Club awarded him the title V (Versatile rating) - All-round assessment. After returning home to Ireland Ally recently successfully participated in other "field trial" competition, where he fared extremely well. He holds a "Certificate Gundog Qualifying At The German Pointer Club of Ireland Open Field Trial".
Ally is no longer worthy father and grandfather. With his descendants can be found in Ireland, England, Norway, Austral .. 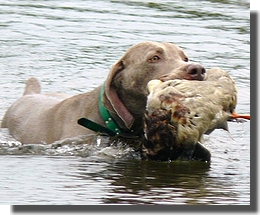 . Transmitted to their offspring not only its beauty but also great hunting talent and a huge appetite for work! The gallery is located Ally its own section with their pictures and photos of his "children". To quickly see the Ally gallery click here and Allys children gallery click here.